Yesterday little M got her hearing aid…It worked right away! When the doctor turned around (so little M couldn’t read her lips), and talked to her, her eyes got very big when she heard her, and she was able to answer the simple questions she was asked. It takes some work for her to focus on where sound is coming from, especially in a store, or when two people are talking to her, but she could hear!
I was going to take a video, but I got completely overwhelmed and forgot.
She kept it in for about a half an hour, then was overwhelmed and wanted it out. She went home and slept for an hour, she was so exhausted. She wore it at the store for a little while, but there were too many sounds, and it freaked her out a little. We will have to work up to it slowly.

She decided she wasn’t into it, but I had her wear it while she watched a tv show… and then she realized she could hear what was going on, and she decided she liked it after all. Then, last night, she asked to wear it. She wore it during dinner, and was able to hear us talk! She thought it was hilarious when the husband was talking on the phone, and she could hear him…she kept repeating what he was saying and then would crack up laughing.

After an hour or so, she needs to take a break from it, to give her ear a little break, but I think it is growing on her! It is turned down very low while she adjusts, and in a couple of weeks it will be adjusted a little louder.

Hopefully, her poor ear will adjust quickly to having the mold stuffed in there, and she will be able to wear it longer and longer. 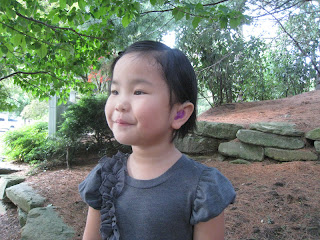 So far, on day one, this is everything we hoped it would be…We are so thrilled for little M, I just don’t even know how to describe how great it feels to see the excitement in her little face when she hears something she normally couldn’t hear at all.

During the next couple weeks, we will be working on building up the duration that little M can keep her aid in, and we have some computer programs to help her recognize sounds that she has never heard. We will work on some speech therapy at home with her, and help her learn how to listen. 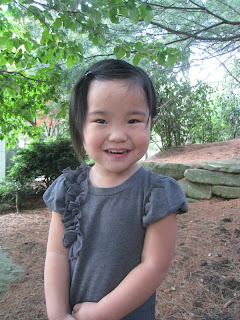