Yesterday we had little M’s heart checkup. It has been one year since we last saw her cardiologist.

When he first walked into the room yesterday, he was very surprised at how much little M has grown. Surprised and pleased.

They did an echo, an EKG, and took x-rays. 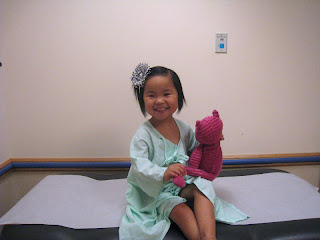 One of the things her cardiologist is concerned about and always wants to keep an eye on is her pulmonary valve, which they left alone during her surgery, even though it was a problem, in the hopes that it would grow with her. This way, it would not need to be replaced later, but could be stretched and fixed without another open heart surgery. It was a little risky, but so far, it is holding up. You can still hear that it is quite squishy, but it’s hanging in there. The other thing they watch is her tiny VSD (which is a hole in the septal wall between the two pumping chambers. Little M’s VSD was in an area that the surgeon was unable to reach, and it is very small, so they left it in hopes that it would close. It has not closed, and they plan to still keep a close eye on it. 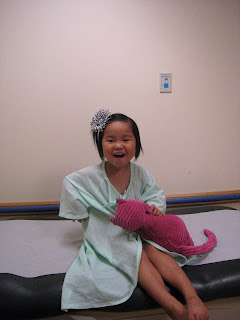 One of the things we were concerned about is that little M’s lips and the area around her eyes have been turning blue. If you know anything about heart issues, this is usually a bad sign…but since it has only happened when little M is active, her cardiologist wasn’t worried, and said that this will happen probably more and more. If it happens when she is not active, or if her nail beds turn blue again, that would be a bad sign.
While I am not thrilled that my daughter’s lips turning blue is going to be normal, I am super relieved that it is not serious. 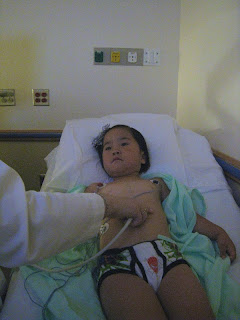 Little M charmed her way from room to room, waving, giving high fives, asking for stickers…she even charmed one of her nurses into bringing her a bag of goodies usually reserved for children actually staying at the hospital, and when she went to carry it and found it was too heavy, she bossed her nurse into carrying it to her exam room for her. And for some reason, he was more than happy to oblige.
I was slightly mortified.
Later she told me she likes boys because “they can carry my bag!” 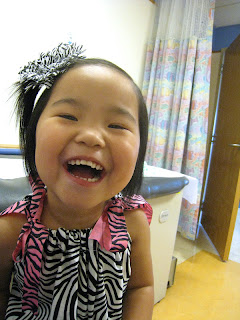 Yay for a healthy heart!!